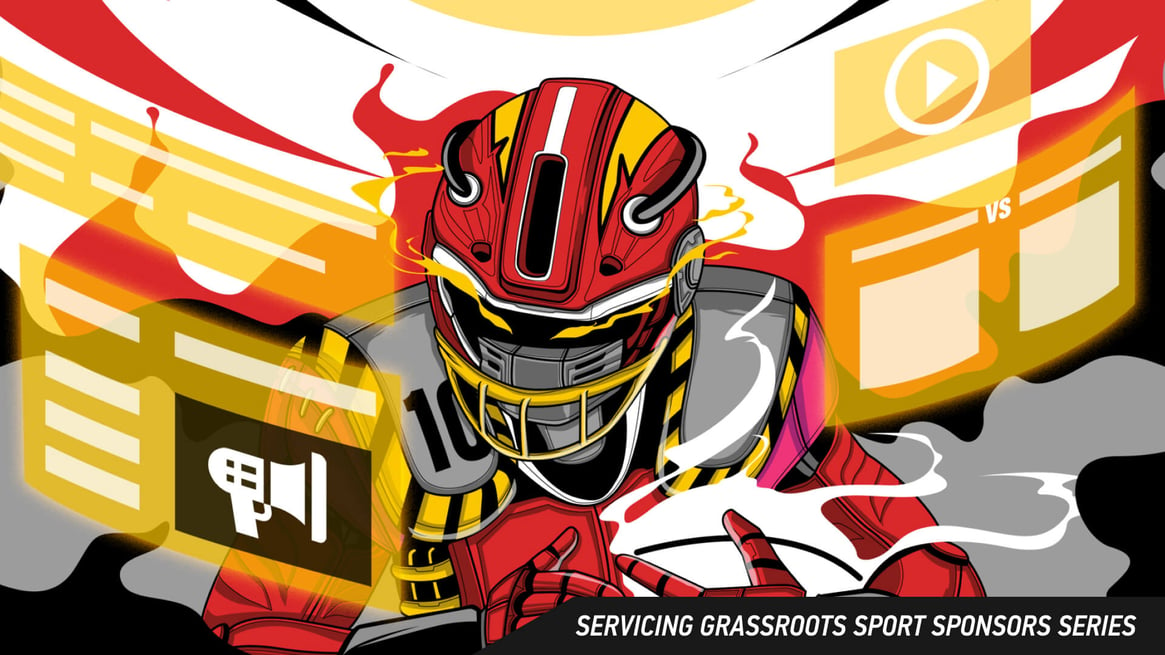 Securing your first sport sponsors for your live streams is a big step. It means you are now responsible for collecting digital ads from your sponsors, running them on your streams, and ensuring that the campaigns are a success.

Securing your first sport sponsors for your live streams is a big step. It means you are now responsible for collecting digital ads from your sponsors, checking them, running them on your streams, and ensuring that the campaigns are a success.

To do this, you need to know your way around digital banner ads.

In this series of blog posts, we’ll help you learn the ropes so that you can give your sponsors the support they need to make great ad campaigns. But before we can share the tricks of the trade, we need to take a step back and look at the building blocks that are used to create a banner ad.

For the moment, we’ll avoid any discussion of what makes a good or bad ad and make sure that you are comfortable with the terminology. In the next post, we’ll take a closer look at each of these elements again and explain how small tweaks can make a big difference. Even if you’re an experienced advertiser, these posts will still be useful, as there are some key differences between standard digital banner ads and those that are designed for live sport.

The most significant difference is that ads shown during live sport can’t be clicked on. Advertisers can’t use a button to direct people to “Buy Now” or “Find Out More,” so other methods must be used to get the viewer to respond to the ad (more on this below).

Typically, ads shown during live sport streams aren’t animated. The ads are static, so all the information must be displayed in a single frame.

A static banner advertisement with QR code for a pizza store.

That doesn’t mean that ads shown during live sport are never animated or that animated ads can’t be successful. TV network sports channels often show animated banner ads during live games. Currently, the LIGR platform only accepts static ads, but we plan to include animated banners and video ads soon.

It’s important to remember that many live sports viewers stream games on phones, laptops, or tablets. This means that any small text on banner ads will often be unreadable on a small screen. Even when viewed on a big-screen TV, viewers will normally be at least a few meters away from the screen – unlike on a computer where viewers will sit close to the screen.

Because of this, and the fact that the ads are competing with live sport, live stream ads have to be very simple, but also memorable and eye-catching.

Size refers to the dimensions of an ad, measured in pixels. You might be familiar with common banner sizes used on webpages such as 728 x 90 or 468 x 60 – but the LIGR platform does not use these standard sizes. This is because the ad sizes we use are optimized to fit on the screen without obstructing gameplay.

Weight refers to the space that an ad takes up on a computer disk, measured in kilobytes. For live streaming, it is always best to keep the ads as small as possible to ensure that ads are loaded quickly.

For optimum performance, we recommend each ad should be less than 1MB.

As the LIGR platform currently only accepts static ads, so you don’t need to be too concerned with timing right now. You only need to understand that “static” means non-animated. Digital ads can be static, looping infinitely, or have a set number of loops, for example, three loops then stop. Often, ads are also restricted to a time duration for each loop, such as 10 or 15 seconds.

A designer must know the preferred file formats; otherwise, they may end up supplying incompatible files. The LIGR platform accepts JPEG and PNG image formats.

Ad specifications must be fully adhered to, but the elements that make up the design part of an ad are more flexible. They don’t have to be included, but without them, the ad is likely to suffer in terms of performance (We’ll cover how changes to each of these elements can affect performance in the next post in this series).

Most ads designed for live-streamed sports broadcasts include four essential design elements: branding, an image, an offer, and a call to action. 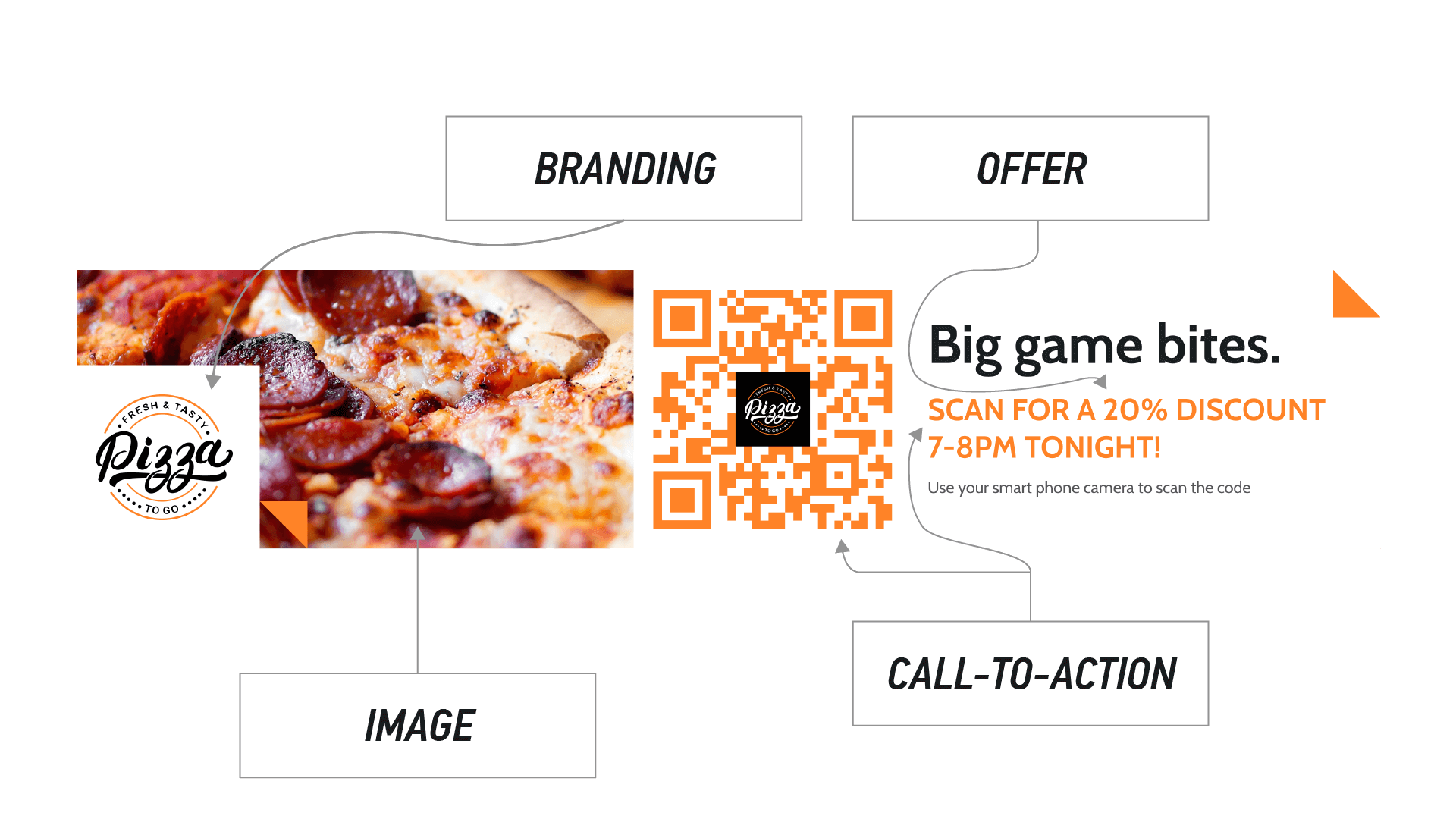 Pizza advertisement explained - the elements that make up a successful ad.

Branding isn’t just the company’s logo; it also includes any corporate colors, fonts, or slogans. The purpose of branding is to help the audience instantly recognize a company that they are familiar with.

Most ads include an image, either a person, a group of people, a picture of the product, graphical icons, or an illustration. Ads don’t have to include an image, but generally, ads that do will perform better than those that don’t.

The “offer” is the message that the advertiser wants to communicate to the audience. It’s known as an offer as an ad should include a strong offer that will convince the viewer to act on it (for example, the 20% discount seen in the UberEats ad above). An ad that just states the services a company provides doesn’t count as an offer.

The best ads deliver a single, powerful message very clearly, without clutter. Ideally, the advert should use short sentences and words to ensure that the message is readable at all ad sizes.

Be sure to use the test feature on the LIGR platform to test your sponsors’ ads and make sure that you can read any small text when viewed on a smartphone. If you can’t read all of the important messages, then you should inform the advertiser and ask them to adjust the ad. If small text is included, it must not convey any vital information, such as the main offer or call to action.

A call to action (often abbreviated to CTA) is a term that is mainly used to describe the buttons in banners ads that say “Click Here” or “Buy Now.” However, a call to action is actually any statement in advertising or marketing material that instructs the viewer on what they should do next. It could be to make a phone call, go to a store, or visit a website.

Although a strong call to action helps performance, some ads don’t need a call to action. If the objective of a campaign is awareness, then there is no need to direct the viewer to perform an action.

For live streaming ads, tracking should be incorporated as part of the call to action. Ordinarily, tracking in digital ads happens behind the scenes, but as viewers can’t click on ads in live streams, they can’t be tracked in the usual way.

Sponsors often overlook tracking, but it’s incredibly important because without it, it’s hard for a business to know if their campaign has been a success or not. It’s better for you as an ad platform to insist that your advertisers have in place some kind of mechanism for monitoring the success of their ads. Later in this series, we’ll dedicate a whole post to tracking and show you how to implement other methods such as QR codes and discount codes.

A QR code used in an ad for Pilot, a men’s health services company. Powered by LIGR.Live.

Now you have a grounding in the elements that make up a digital banner ad, we can move on to the next stage. In our next post, you’ll learn how to confidently critique your sponsors’ ads and provide them with insightful tips: Optimizing Live-Stream Sports Ads for Success (coming soon).